Why carry out this modification?

When the ACOM 600S and ACOM 1200S were designed, the designers chose to support a regular straight through RS-232 cable for computer control, this differed from the Null Modem cable that was required by the ACOM 2000A. However, a mistake was made in the design and for the remote power on operation to function the DTR, DSR, RTS & CTS lines still require wiring as though they were a Null Modem cable. This means that for full computer control and remote power on operation to be possible, a custom cable must be used. This modification enables the use of a completely standard straight through RS-232 cable for both computer control and remote power on. If you never use the remote power on capabilities of the ACOM 600S then this modifiation is not required and should not be attempted.

Once this modification is complete a standard straight through RS-232 cable can be used however the ACOM 600S will still support a custom wired cable if one does get connected in the future, allowing for the wiring noted in the manual to be utilised should someone who is not aware the modification has been made uses the amp in the future.

Whilst the ACOM 1200S appears to suffer from the same unusual wiring of the RS-232 port and this modification should in theory be possible on an ACOM 1200S, i do not have one to verify that this is in fact the case. If anyone does attempt this on an ACOM 1200S, i would appreciate some feedback so I can update this guide.

What will you need

Disconnect all wires from the ACOM 600S and unplug it from the mains (DO NOT WORK ON LIVE EQUIPMENT), I would suggest leaving it for 30 minutes or so to allow any charge left in any capacitors to fully drain just to be on the safe side. 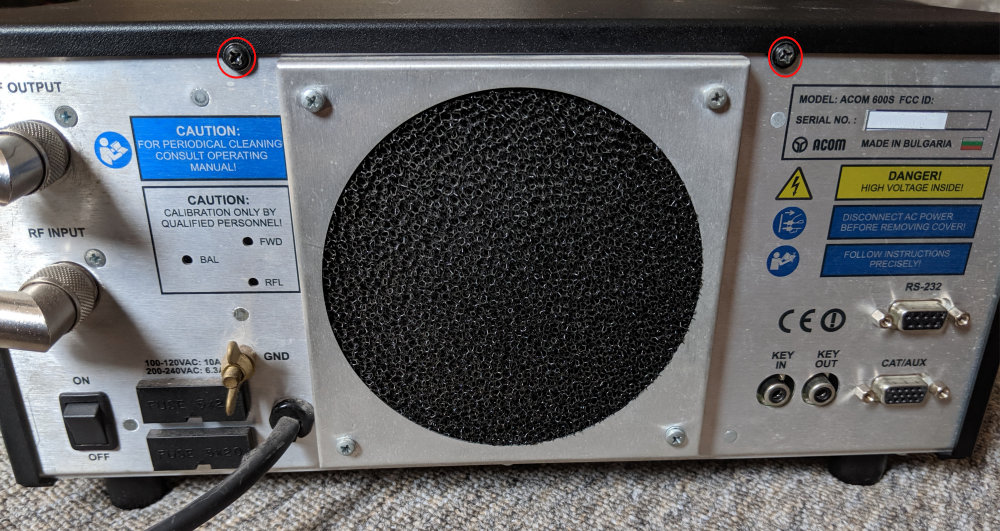 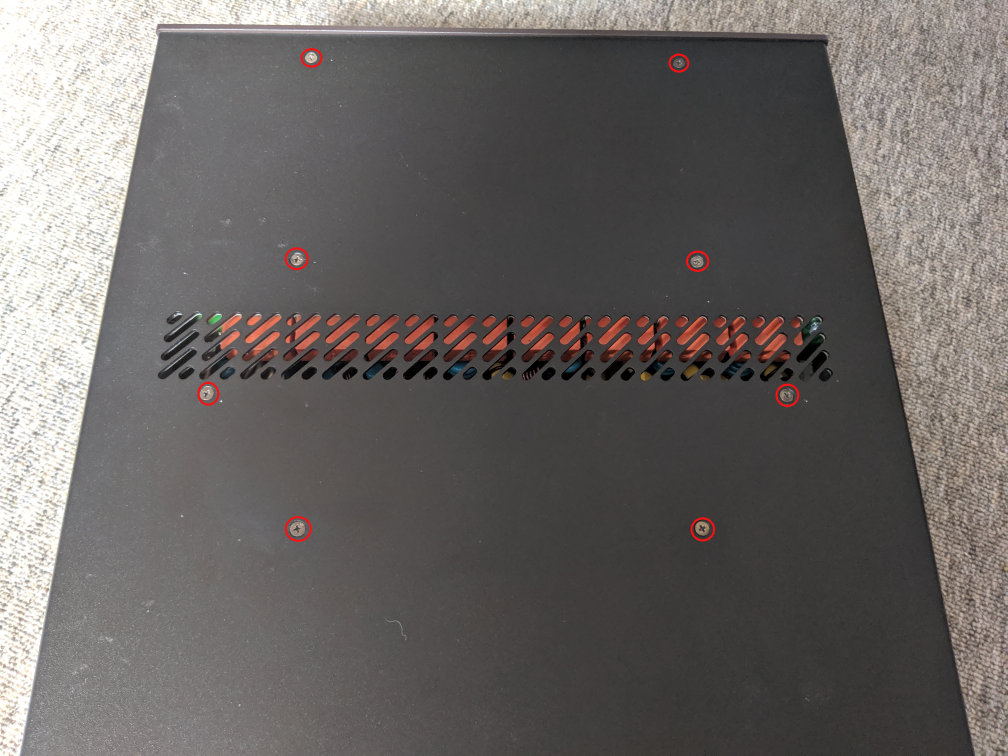 The outer case should then easily slide towards the rear of the amp and can be removed.

The board we’re interested in is the CPU Board which has the RS-232 board and port attached to it. 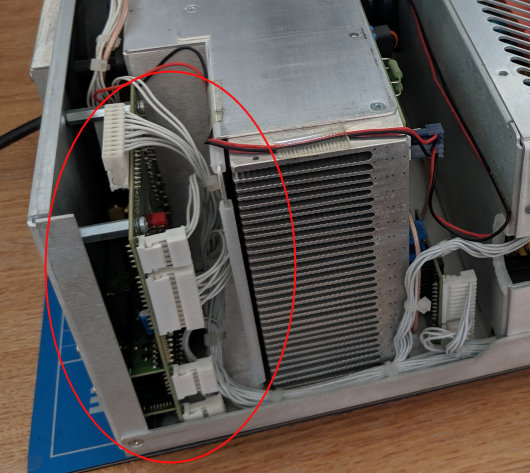 Unfortunatley we can’t get to the screws that hold it in as the large rear module is blocking access so we must first remove the rear module.

Removing the rear module can be a little tricky so be patient and take your time.

Next, remove the small retaining clip that holds the coax cable

The rear module is held in place by 3 screws on the bottom of the case, these should now be removed 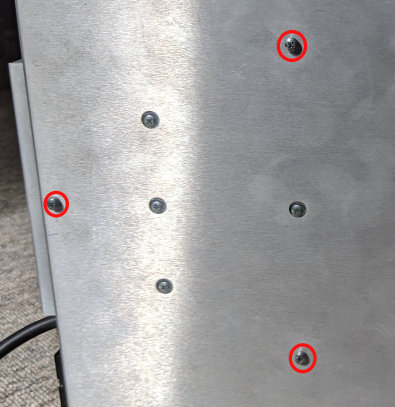 Finally, remove the fan connector, this is the lower of the two connectors leading to the fan 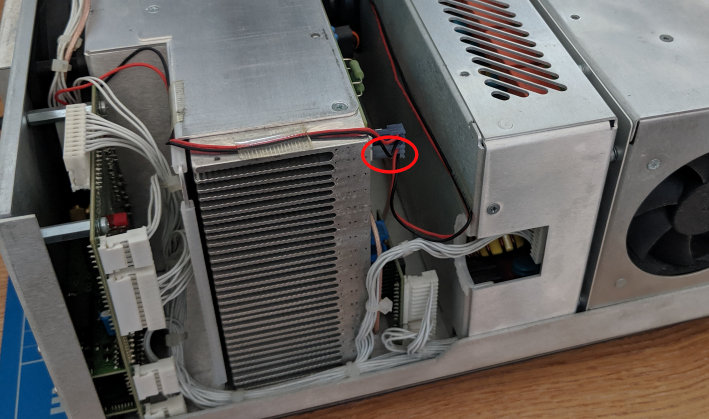 It should now be possible to lift the module out of the amp and set it to the side, it will still be connected and can be a little tricky to maneuver past the wiring, take your time.

You may have to also disconnect the two white connectors shown below, however this isn’t strictly neccesary. 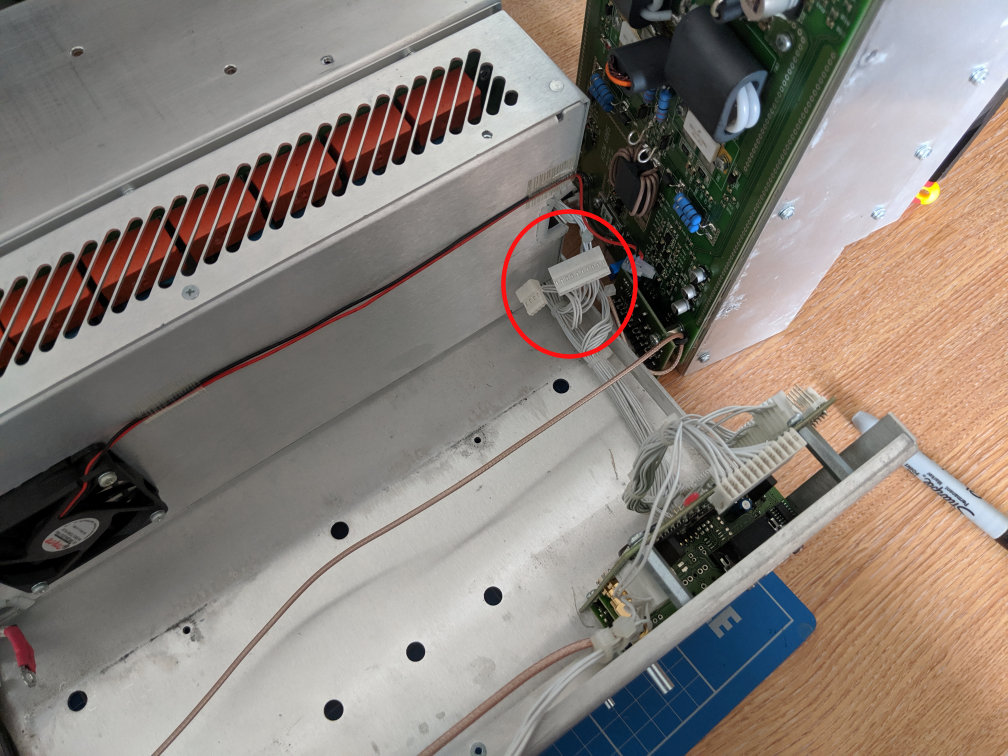 We’re now ready to start removing the CPU Board. Begin by disconnecting the 5 white connectors 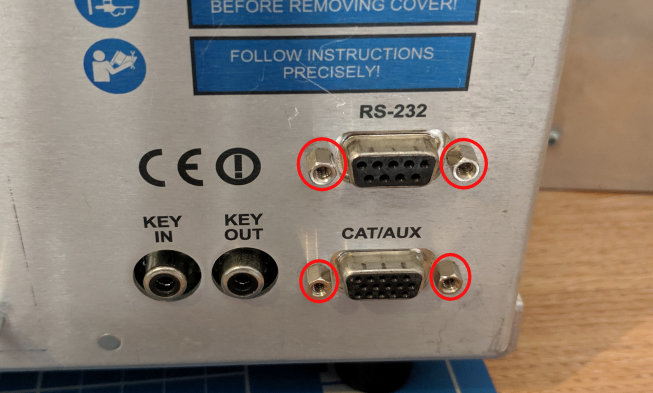 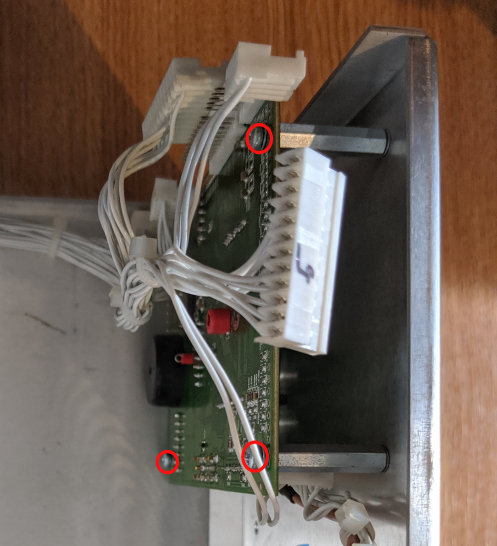 Finally remove the two white connectors and the SMA Connector from the rear side of the CPU board. Make note of which SMA connector is used as there is a second un-connected one on the board. 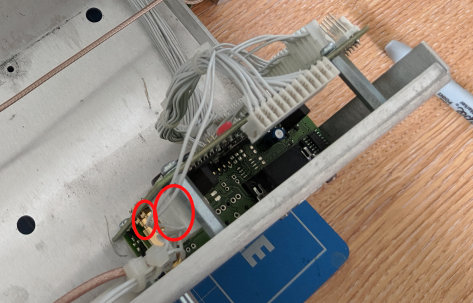 The CPU board should now be seperated from the amp and can be worked on seperatly. 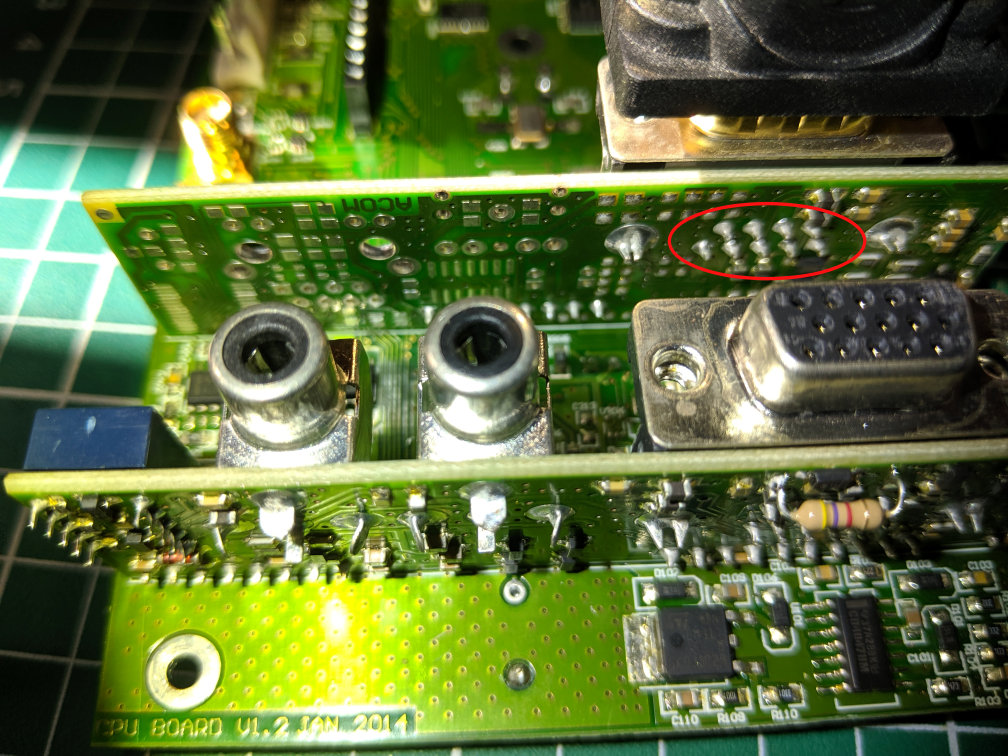 The board pinouts are as follows 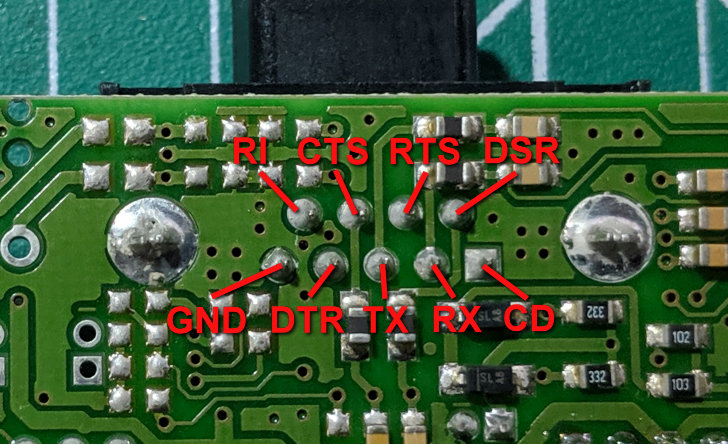 You’ll notice that the DTR and RTS pins have no traces attached to them (i’ve verified this with a meter). We need to connect the RTS pin to the CTS pin and the DSR pin to the DTR pin. 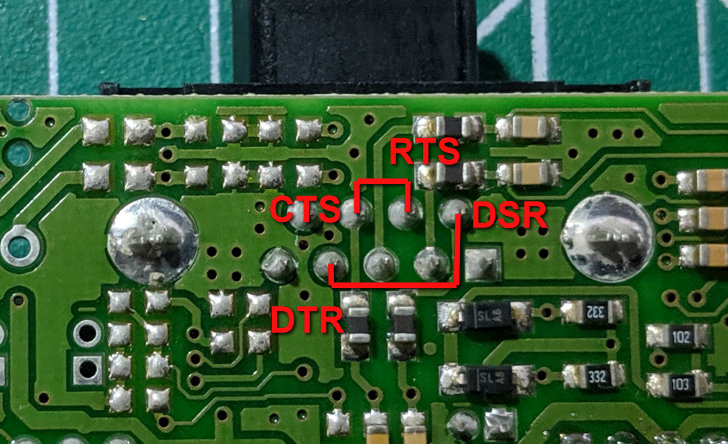 I made this modification using some fine Kaynar wire 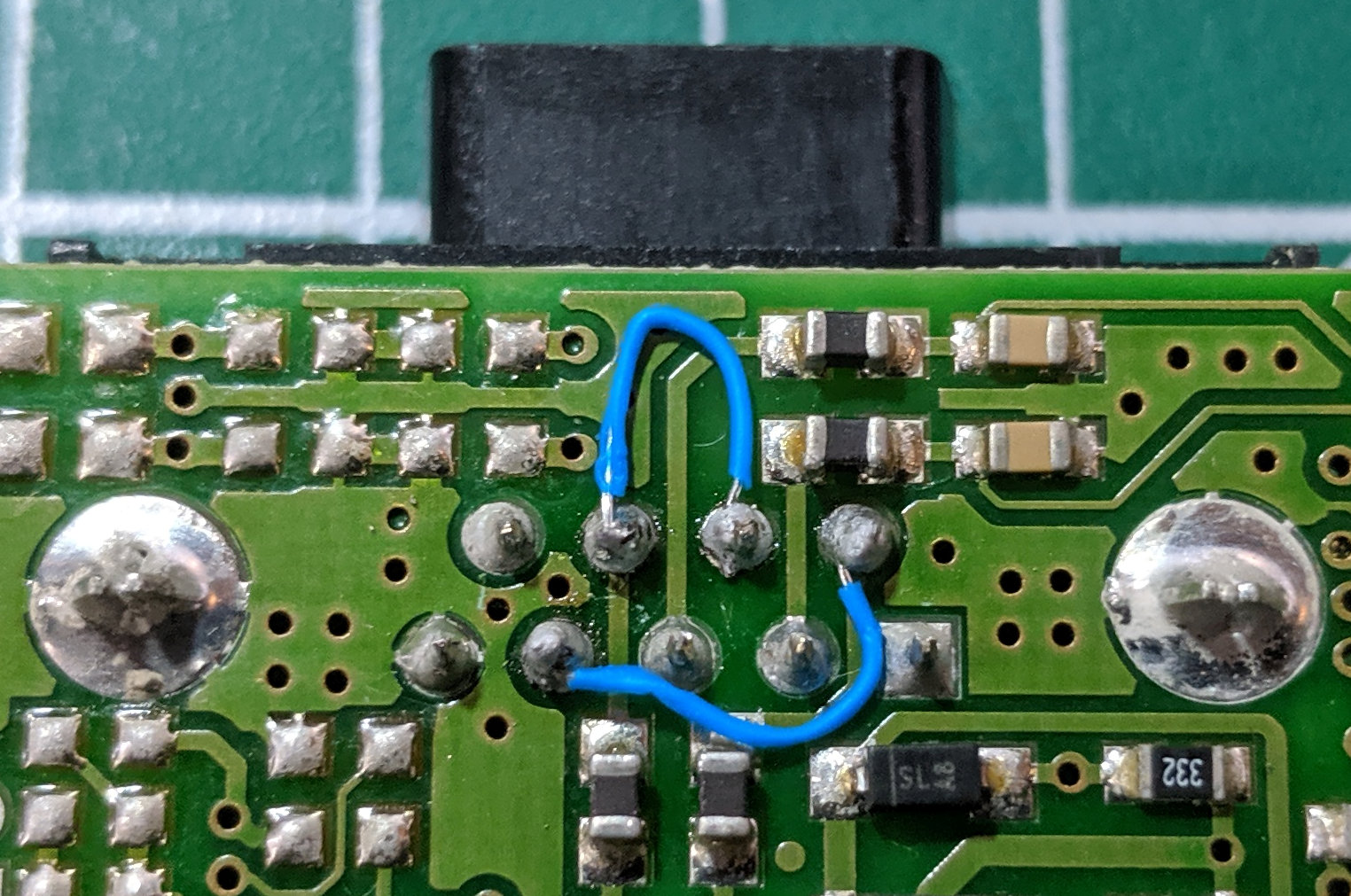 The mod is now complete

Follow the disassembly instructions in reverse order, be very careful not to trap or pinch any wires, especially the internal coax. The ACOM 600S will now support not only the custom cable wiring specified in the manual but also a standard straight through RS-232 cable for both computer control and remote power on.